In elementary gym class, there were times when we’d play team games. The teacher would choose captains, who were then allowed to choose their own teams. They’d alternate, each captain choosing one person at a time until the entire class was on one team or another. I would stand there, a bashful, non-athletic redhead, making furtive glances through my eyelashes with my head bent toward the floor thinking, Pick me! Pick me! Please, pick me!

For me, those periods of waiting were pure torture. I was among friends, among classmates and acquaintances I had known and spent six hours a day with since I was five years old, but I had to just stand there and wait and hope while, one by one, their names were called and mine was not. More than half the class would usually have gone to one side of the room or the other by the time I heard my name: “Rhonda!” Finally, with relief, I would join the side who had chosen me. I hadn’t been chosen first, but I hadn’t been chosen last, and I had been chosen. What a relief.

I wonder: What might have happened if I had been less bashful, more eager? More confident? If I had been one of those kids who could barely contain themselves, bouncing up and down with their hands in the air and audibly shouting, “Pick me! Pick me!” Might I have been chosen first, or at least in the first half of the class rather than the last? Or would I still have had to play the waiting game?

Tonight, I had a fleeting vision of being back in that elementary gym class, amongst a bunch of other eager kids bouncing up and down with hands high in the air and shouting, “Pick me! Pick me!” But I wasn’t in an elementary gym class. I was at a church prayer meeting, one celebrating the birthday of our church and asking for God’s hand and blessing on our church for the future (check out the inspiration in Ezra 8). In my heart, I long to do more in the church and I was volunteering to the Lord, Use me. Please, use me. But instead of only one volunteer, like when God asked for a volunteer and the prophet Isaiah responded, I envisioned the entire roomful of hundreds of volunteers saying, “I’ll go, Lord”—and drowning out my voice, taking place after place on the team while I was left sitting on the sidelines thinking, Pick me, Lord. Please, pick me. 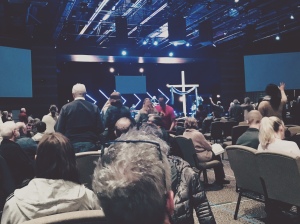 Not that I don’t think God won’t pick me, someday. But I feel like I’ve been waiting on the sidelines for a while, hoping my name would be called. Hoping I would be called to join the ministry in some capacity, even while I see one person after another get called into ministry, even while others are quitting the team. But now that I’m home, I can’t get that picture of waiting, that picture of hundreds of volunteers in the place of the lone one—Isaiah—out of my head. So I looked up the passage. And I discovered something: There is a reason for the wait.

Here’s the passage I had been thinking of (Isaiah 6:8, NIV):

Then I heard the voice of the Lord saying, “Whom shall I send? And who will go for us?” And I [Isaiah] said, “Here am I. Send me!”

Isaiah volunteered and was chosen. He didn’t need to compete with others—he was the only one there besides angels, as far as I know. Simple. Right after volunteering, God gave Isaiah his marching orders: “Go.”

But there was a scene I had forgotten about right before that one, one that I think is just as important (Isaiah 6:1, 5-7, NIV):

I saw the Lord, high and exalted, sitting on a throne; and the train of his robe filled the temple. … “Woe to me!” I cried. “I am ruined! For I am a man of unclean lips, and I live among a people of unclean lips, and my eyes have seen the King, the Lord Almighty.” Then one of the seraphim flew to me with a live coal in his hand, which he had taken with tongs from the altar. With it he touched my mouth and said, “See, this has touched your lips; your guilt is taken away and your sin atoned for.”

What I realized was that when Isaiah first came before the Lord, he wasn’t ready. The Lord had to prepare him for what was to come before he could be used. And while I know my sin has been atoned for—Jesus’ death and resurrection did that—I also know that the waiting stages are often times of preparation. Times when God is preparing us for what is to come, equipping us with what we need to serve him. Because one thing I can’t ever imagine is God leaving someone who genuinely and eagerly pleads, Pick me! Pick me, Lord! on the sidelines without one day saying, “I need you.”

The Lord will use me, in his own time, in his own way, for his own glory. Meanwhile, I’m glad to be one of many raising my hand, waiting, and whispering, Pick me, Lord.

Bits & Pieces
I have an update on last week’s running goals! If you’re interested, check it out in the newest section of my blog, the Virtual Running Club Menu (accessed on the left, through the main menu).

Also, ICYMI, earlier this week I posted about another blog feature, the Daily Blessings Menu (also accessed on the left). I’m trying to acknowledge God’s blessings more and complain less, and this is one way I’m going about doing it.

One thought on “Pick Me, Lord!”