What if you were asked to write a bio of yourself using 25 words or less—not for any specific context, but simply with a goal to describe yourself? Could you do it?

Then, what if later that same week, you were asked to capture the word “identity” in a photo—could you do that?

Those were the challenges I faced this week through my small group at church, for which we are using the book Courageous Creative by Jenny Randle (Challenges 21, 22, and 25). And that’s what they were: challenges.

First came the bio. Let me cheat and describe myself, particularly my training as a writer, in more than 25 words: I have degrees in technical writing, in the teaching of writing, and in rhetoric and professional communication. For my research at the Master’s and PhD levels, I focused on writing for audiences. Thus, having some idea about who I’m writing for when I write is pretty important to me, even when it’s not something that falls within the “professional” realm. And there I was facing a generic challenge to describe myself—my “awesome self” to be exact (p. 109).

Ahem, Jenny, not enough info. For whom? Why? For what platform/medium? (These are the first questions of writing! Audience, purpose, context! Especially for a technical writer trained in rhetoric like myself.)

I thought of the people in my small group. Seemed not to fit the bill. Too small. But something like a Facebook or Instagram bio didn’t seem to fit either. I was lost. Since the book we’re using is a Christian devotional, that did provide some direction: What do I think of myself, particularly in relation to God?

The day I read the challenge, all of the above thoughts came to mind, I panicked a bit, and then I put it away. Not today.

The next day, I tried to narrow down the type of info I’d put in this bio. Naturally, I wrote two-and-a-half pages of notes that didn’t come near to covering who I am.

The third day, I came to a draft. By now I had read the devotional and challenge for day 22—to revise the bio—so I knew I could draft it (something I have trouble doing, anyway, being the not-perfect perfectionist that I am). So I drafted it:

I’m a child of God,
imperfect but redeemed,
a sinner but forgiven.
I want to shine like a star in the universe
and glorify HIM.

I liked it, but again, draft. And it seemed like there was so much more that I was missing, even though I managed to put my life verses into it.

The next day, I completely revised it—not yet getting anyone’s input, as the challenge suggested, since I figured I could get input from my small group on Thursday.

Ehh. I packed a lot more in there, but honestly, who would know it’s supposed to be a bio without any context?

Still struggling with these (and not satisfied), I put off the challenge I came across for Day 25. Jenny cleverly put these close together, not necessarily saying they were related, but still. Days 21 and 22 were write and revise a bio, and then day 25 was to capture the word “identity” in a photo using the negative space around the focus of the photo as something of interest.

Identity. In a photo. I had no clue what to do.

Honestly, I considered pulling out my dictionary (okay, pulling it up on my phone) and looking up the word. But I knew that wasn’t the point, because Jenny had asked her readers to pray about it and encouraged/reminded us that we have a God-given identity, and shouldn’t focus on/believe the lies we tell ourselves (or that are told to us) instead.

But how was I to capture that in a photo? Ideas flitted through my mind, some that I don’t have the resources, skill, or technical know-how to pull off. None of them felt quite right anyway. But today it was rainy and I was given unexpected time to be alone with God and my camera, and I think I did capture it—at least, my rendering of identity. 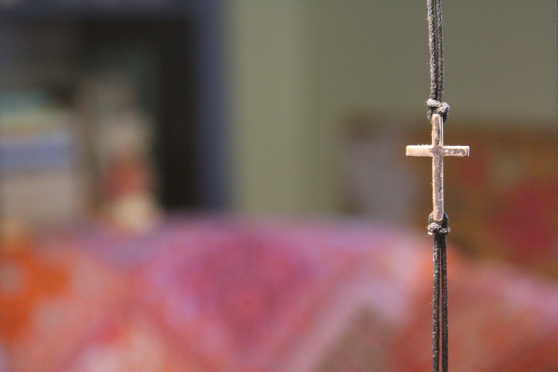 My savior, Jesus, represented by the empty cross, and in the background is the place in which I meet with him every day. This is my identity—he is my identity. I can’t separate myself from him. And I hope people see him when they look at me, and are drawn to what they see.

I will be the first to admit that when people have seen me in the past they haven’t always seen Jesus. Or, perhaps, they’ve seen me in some of (or only) my worst moments—there have been plenty—and think they’ve seen him and are repulsed by what they’ve seen. I know someone who has rejected even the existence of God because of the example his Christian parents provided as he was growing up. But that’s exactly why I need a savior: I’m a sinner in need of redemption, of someone who can restore my relationship with God and sanctify me (and thank God he is doing that day by day by day and won’t stop until he’s done).

And if I’ve been that bad example for you—shown you the need for a savior rather than the savior himself—I ask that you forgive me. And that you would look beyond me to him.

But I digress. Back to my story. When I took this photo and captured what, to me, encapsulates identity—my identity—it suddenly dawned on me why I couldn’t write that bio. It was because the bio has already been written for me. It’s more than 25 words, but Jenny must have miscounted when she made that request in her book.

I have been crucified with Christ and I no longer live, but Christ lives in me. The life I now live in the body, I live by faith in the Son of God, who loved me and gave himself for me. (Galatians 2:20, NIV)

I’m thanking God for giving me an identity in him tonight.

PJs? ✔️
My authors friend @m.d.taverner is in her local news today! Way to go, Michelle! I highly recommend her books—I love her writing. You can find her books on Instagram.
What are you enjoying this summer? Walking in the warm sun is my vibe.
A week ago, I was diagnosed with colon cancer, but God has also granted me the peace that passes ALL understanding. I am not afraid—but I know people who love me that are afraid. I know that God is with me and holding me tenderly, close to his heart, and leading me and mine through this with gentleness (Isaiah 40:11), and that’s all I need to know. It is well with me and my soul. 💛
Day 3 of pre-sketching/prep work for a commissioned word art piece. I think this is better than before—but how do I get my vision of color and finishing touches into it, since I work in ink and pencil? Especially with the background I have envisioned.
Commissioned pre-sketch/ideas sketch, part 2. You’ll have to zoom in to see it, but the bubble letters seem a bit juvenile to me. It’s hard to execute someone else’s idea and still create something that melds with the images in your own head. (It’s hard enough to execute your own ideas!) I may scrap all of this before I am through. Hope he’s willing to wait a year for this piece…
Loading Comments...
%d bloggers like this: